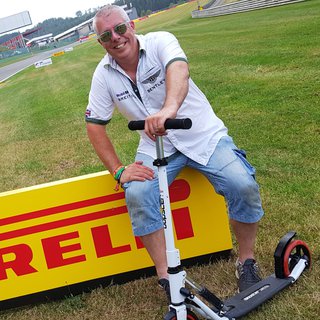 I have been into gaming since I was at school. REVS on the Commodore 64 was the first racing game I seriously got addicted to. Then came the Playstation generation and Gran Turismo was the choice of pleasure, right from the beginning I was hooked. It even came to the point of queuing outside GAME store for midnight release of GT3 I think it was and then taking the next day off work to play it.

It was then time to move to the PC and my first insight into more realistic racing was the GTR FIA endorsed GT Racing game by SIMBIN. I loved the fact you could download liveries, cars and tracks off the interweb for some really obscure circuits that at that time I hadn't heard of. GTR2 came along but soon I decided, on the back of a conversation with a fellow work colleague, to try iRacing.

I haven't looked back since. As much as it can be frustrating sometimes, I feel iRacing is the best platform to represent the realism of driving a real Racing Car and completely satisfies my gaming needs. I joined iRacing in October 2014 and have now purchased most, if not all of the Road Series content. Recently I have upgraded my OMEGA GT Sim Rig to include Oculus VR, going from triple monitors, something I would highly recommend.

It's been a great journey getting to the point I am now. I was given the opportunity to go into joint collaboration with another iRacer to form what turned out to be quite a successful UK based iRacing League. Unfortunately it all collapsed in 2017 and some of the fall out from that are building what you see here today. As much as it hurt to throw away all the time and effort I had put into that league, I am more than excited on this new venture of NOMAD Sim Racing team. I hope between myself, Jason and our team members, we can really make a good name for ourselves and become one of the leading sim racing teams.

Here's a few of the latest results Simon has achieved lately in official races: